Equity is for Everyone

As a woman who worked in Westminster and various other political fields, I am compelled to speak up. For men. It seems they need a spokesman, and it cannot be a man as they are now too wary (and no, using the word spokesman doesn’t compromise my femininity). I also speak up for those with no axe to grind; who do their best to live harmoniously with others and who would love to see the words equality and equity used in the right way.

This is obviously not a response to any genuine sexual assaults or harassments that have occurred, both are abhorrent, I think that goes without saying. But to the disproportionate and irrelevant gossip that’s passing as news and damaging gender relations. As Professor David Benatar explains in his book, The Second Sexism: Discrimination Against Men and Boys, sex discrimination against men is actually undermining the cause of female equality, not advancing it. This is not just a political problem, it’s a society issue, and we need a rational discussion about how it got this far.

As gossip and old grievances have become so-called news, and the drip feed of militant feminism for the last decade has reached its zenith, it’s time to look at where we go now. The word equality has long been misused. Equity, which is what people really mean, is about giving people the same opportunities regardless of who they are. We are not all the same and contrast is at the core of humanity. Respecting each other and accepting that unconditionally, is the real aspiration. A female run society where men are obsolete or oppressed and we legislate in favour of one gender over another is not a goal we should be striving for. A small group of women have undermined real sexual assault and sexual harassment by lumping it together with harmless words, an avuncular tap on the arm or someone making a romantic pass. This is neither brave nor empowered. The majority of men need not justify themselves or apologise on behalf of their gender. In our evolved culture of gender fluidity and a better understanding of gay and transgender rights, it seems odd that so much is done to oppress one gender and glorify another in comparison.

There are lecherous people in Westminster of course, as there are in any walk of life, but this is far less than it ever was as we have evolved as a society, and I believe it is how you deal with things at the time that is important. My mother laughed about being chased around a desk at the film company she worked for in the ‘60s! Unbelievable now. Thankfully we live in different times. Things change and are changing all the time. But this change needs to be for the betterment of everyone, not to the detriment of some.

Yes, there was that ‘handsy’ boss in the City and that smutty lobbying group director. However, these occurrences are rare nowadays but the media is choosing to focus on a few events rather than the norm. Did these things scar me? Have I chosen to seek revenge on them? No. My parents instilled the useful life skills of self-autonomy, class and dignity. I can choose to ignore, engage in, walk away from or address something. Our reaction to an event is our choice.

The drip feed of misandry in our pop culture for the last decade or so has pushed a one-sided agenda in favour of women to the detriment of men. The way we talk about and portray men would be unthinkable if it were about any other group. They feel they can’t say anything for fear of being labelled a misogynist.

The Balanced Harmony of Contrasts

I wonder if the women who choose to be offended (it is a choice) by a wolf whistle, or who perceive (perception is subjective) any form of human touch as sexual, have any idea the damage they are causing on the balanced harmony in our world of contrasts. As we have blurred the world of work and personal life, it is difficult to separate behaviour that goes on in both. Respect for the individual needs to be found in all areas of life. Do we forget that many people innocently meet their future partners through work, what of them? Should that be banned? Also by creating this disharmony, do they not see that men will now prefer to work with other men, or women with women out of fear, thus making that ‘gender equality’ even more unattainable? What about the real sexual assaults and sexual harassments which have now been casually boxed up with genuine romantic advances, how has this best-served women?

I wonder too about the men who label themselves as feminists. If you need to state you are something it often means you aren’t. It is what you embody that is the most important thing. Some of the most honourable and feministic men I know are the ones with the cheeky banter or the incorrigible flirts because I’d rather they said what they were thinking than not. It’s the quiet ones, thinking it and later acting on it with no actual respect for women that are the real concerns. Calling themselves feminists probably alleviates their own issues. Repressing peoples’ authenticity never ends well.

On the tube, a male friend and I had to sit apart as he got up for a woman to sit down and she rudely said, ‘she didn’t need a seat just because she was a woman’. He replied, ‘I’m giving you my seat not because you are a woman but because I am a gentleman’. Maybe he lifted it from a film, but the people next to him looked like they wanted to applaud! As did I! Oppressing others’ behaviour or choices might make some people feel better but we cannot go down a path legislating or restricting people from being who they are. Isn’t that the antithesis of equality? Where one sees sexism or being patronised, another sees it as good manners and respect. If no harm is caused, then it is perception and reaction. Gentlemanly behaviour is not just for men. Dignity, respect, good manners and class are for anyone at any time.

Is this, in fact, a British issue on the loss of identity? Americanisation has distanced us from our neighbours who seem to have fewer issues and a clearer idea of how to get along. An Italian colleague jokingly always kisses my hand when he greets me yet the power dynamics are well balanced in our meetings. Nordic and German friends just accept everyone for who they are but accept we are all different. Though many a Nordic female has told me they love a true British gentleman, whatever that is?! Maybe too much equality negates what makes us different, so people crave those differences more. A British taxi driver recently remarked at the manners of my much older friend who opened the car door for me. Am I bothered by any of these traits? No, because I let people be who they want to be and say what they wish as I hope they will of me. I have the choice to walk away or call them on it if I want to.

We cannot have a society where we legislate against human behaviour when it causes no real harm, simply based on the subjective perception of a few. Naturally, I have had inappropriate comments and behaviour in my life. What woman, and what man hasn’t? I dealt with them accordingly, privately and proportionately, and more to the point I have not blurred the lines between that and anything more serious as is happening now.

The Over Sexualised World

Is this all just a narrative we have created because we don’t want to admit the truth? We’ve created an over-sexualised world, partly through our use of technology, where no one knows what is appropriate anymore. Hypocrisy over others’ sexual behaviour is often a projection of our own ideas and life story. Issues of consent or loss of male identity and purpose are real concerns being raised by men every day. We owe it to the next generation of men and women and those who identify as neither, to clear the ambiguity. George Orwell’s 1984 talked of dystopian desexualised gender roles and Yevgeny Zamyatin in ‘We’ wrote about legislated sexual contact. These were not manuals to live by but worst-case scenario warnings. Replacing the perceived patriarchy with a new matriarchy is not the solution. We need to start remembering that we are one race. The human race. We all deserve respect and must respect each other. Equity is for everyone, and the good news, is we create the future we want. 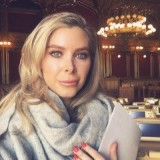