Can Philosophy Contribute to our Understanding of Europe?

This claim should be distinguished from a more familiar and superficially similar one: namely, that “Europe is the cradle of philosophy”, the place which has enabled it to develop and flourish. In my view, however, that gets things back to front: it is not that philosophy is a European phenomenon, but that Europe is a philosophical phenomenon.

On this understanding, Europe’s cultural identity should be conceived as inseparable from the ideal of philosophical rationality and science that first emerges in ancient Greece. Of course, philosophy, under its Greek name, has been, historically speaking, a primarily European phenomenon. However, even that thought should be carefully qualified. Philosophy is a way of thinking which immediately goes beyond any regional particularity: it has always concerned itself with the question, in principle open to anyone, of what properly belongs to the being that we call the human being. And the philosophical claim about the philosophical character of European cultural identity has to be understood in the light of that qualification: European identity is run through from the beginning, and still today, with the cultivation of interests that bear on the nature and life of the human as such, and hence by interests which belong to humanity worldwide and as a whole.

One way of putting that is to say that philosophy is that exercise of our rational capacities that concerns itself with the exercise of rational capacities. In terms of the ancient Greek origin, it concerns itself with questions about what it means to be that living thing with the capacity for intelligent speech – what the Greeks called the zōon logon echon, the living thing with the capacity for grasping the “logos”, as they almost untranslatably put it.

The Greek idea of the “logos” may be almost untranslatable. However, Europe’s historical culture is in part forged in its translation. Europe would both belong to the empirical history of that speaking being and, from the philosophical origin that holds sway through Imperial Roman and Medieval Christian power domains, Europe is also the site of the opening of that history to the thought of a universal history, a history of “Man”: the history of the being first understood as the zōon logon echon and subsequently as that is translated into Latin as the animal rationale, right down to what today we call the rational animal.

At issue is the movement of an empirical history that would belong – or has called itself to belong – to a history of the self-realization of Man as rational animality; a movement, then, towards the proper end of Man. As the site of a movement which would both attest to and as such raise the stakes in the very movement towards that self-realization which it carries, Europe sets the heading towards a condition of peace, freedom and well-being for all humanity, and it would do so, as the French philosopher Emmanuel Levinas put it, “on the basis of a light that a universal knowledge projected onto the world”. This, for philosophy, is the idea of Europe. This is Europe’s promise.

The idea that Europe has a universal significance in virtue of its relation to philosophy is strikingly expressed in Immanuel Kant’s prediction in 1785 of “a great political body of the future” arising on “our continent” – a European Union of Nations – that will likely “legislate”, or at least serve as a guiding example, “for all other continents”. At issue here is a history of the world on its way to peace and freedom. Indeed, the global “cosmopolitan existence” posited by Kant as the final end of world history is not just a philosopher’s idea of humanity’s collective political destiny: the very idea of a global human community living in peace as the end of history is essentially philosophical. The particular history of “our continent” is thus to be grasped in relation to the universal destiny of Mankind; in terms of the movement towards a maximally rational – that is, free – life for all.

On this account, if European humanity is caught up in a process of “globalization” this is not to be understood merely as the upshot of the hegemonic political and economic ambitions of imperialist or colonialist Europeans – an historical geopolitical development broadly conceived – but in terms of the development of a culture that is unfolding worldwide according to principles finally inseparable from reason itself as an inherent capacity of Man. The history of the world is a geophilosophical adventure, and it begins in Europe, with Europe itself as the culture that unfolds in the space opened up, above all, by philosophy.

This is a wonderful philosophical story: the story of a worldwide cosmopolitan hope emanating from Europe.

I believe this cosmopolitan hope is still a hope. However, one would have to be naïve in the extreme not to recognise that this hope, just as much as the European Union whose very existence it inspired, is, in our time, fragile and threatened. Indeed, when one compares the philosophical story which underlies Europe’s historical self-understanding with the reality of Europe’s actual history, the difference can seem enormous. And today it seems to leave Europe’s promise, as Emmanuel Levinas suggests, exhausted, worn out:

“That history of peace, freedom and well-being promised on the basis of a light that a universal knowledge projected onto the world – even unto the religious messages that sought justification for themselves in the truths of knowledge – that history is not recognizable in its millennia of fratricidal struggles, political or bloody, of imperialism, scorn and exploitation of the human being, down to our century of world wars, the genocides of the Holocaust and terrorism; unemployment and continual desperate poverty of the Third World; ruthless doctrines and cruelty of fascism and national socialism, right down to the supreme paradox of the defence of Man and his rights being perverted into Stalinism. Hence the challenge to the centrality of Europe and its culture. A worn-out Europe!” (Levinas, Alterity and Transcendence. New York: Columbia University Press. 1999, p. 132).

This is not, I would argue, a condition in which – facing the challenge to Europe’s centrality – philosophy must altogether retreat from or give up on the inheritance of Europe’s promise. On the contrary, in an affirming choice, a task remains to keep Europe’s promise alive, indeed to construe it as our unfinished work, to give it a future as a promise. This today, would no longer be a promise that calls for every other culture to conform to our heading, but of an exemplary openness to and respect for – not excluding reasoned criticism of – the heading of every other. 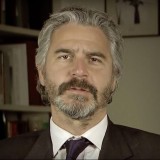 Simon Glendinning is Professor of European Philosophy in the European Institute at the London School of Economics. In addition to that, he is the Director of the Forum for European Philosophy, an educational charity which organises a programme of philosophy and interdisciplinary events in the UK.